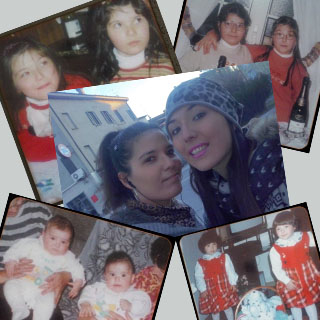 A girl who lived in Italy applied to our agency for help in searching for biological parents and relatives in Russia. This girl was called Galina (Rosalia Di Vaio). She and her sister-twin were born in 1994 in the city of Egorievsk, Moscow region, Russia.

Their birth parents couldn’t leave the children for upbringing that is why they were given up for adoption. In summer 1995 the girls were adopted by a family from Italy. And since that time they have been living in Italy. Foster parents told girls (when they were 12 years old) that they were born in Russia and were adopted. From that time Galina became interested in Russian culture, language and her Russian roots.

And after all these years only then Galina had possibility to find her relatives who lived in Russia. All the years she didn’t know to whom she could apply and who could render help and perform that job. Due to happy concatenation of circumstances she found web site of our agency in the Internet and she asked us to help her. In the end of April we have successfully performed the search.

In order to find Galina’s birth parents and relatives we went to the village of Polbino, Egorievo district, Moscow region, Russia. In this way we found her uncle who was brother of birth father of Galina. Her biological father’s name was Nikolai. And we found out that he died in 1999 that is why Mikhail told us everything about Nikolai’s family, he shared information with us and showed us family photographs.

Also while communicating with Mikhail we found out that Galina’s biological mother was called Svetlana. She was born in Uzbekistan and in the beginning of the 90th she came to Russia in search of a job and better life. In Russia she met a man and started to live with him but their family life was not successful. They separated but at that time Svetlana understood that she was pregnant and soon she gave birth to daughter Tatiana. The girl lived together with her mother. At that time Svetlana lived and worked in the city of Egorievsk, where she met Nikolai (future father of Galina). Some time had passed and they started to live together. Nikolai took her to the village of Polbino where he lived. In some time Svetlana gave birth to two girls-twins. At that time Nikolai was unemployed and the family had financial obstacles: they had no money to buy food, clothes, to pay for public utilities. That is why Nikolai and Svetlana decided to leave the girls at the maternity hospital as they hoped for better life for their children that in the children’s home. Nikolai and Svetlana lived together about 4 years.

At the present time Svetlana lives in Uzbekistan. All these years she knew nothing about her daughters. She was very glad to learn that the girls lived in the adoptive family and everything was going well. We send her photos of Galia and her sister and a letter. Svetlana was very glad and grateful to receive this news. She wanted to maintain relations with Galia and felt guilty because she had left them. From that time every day she regretted that she had made a decision to refuse from her daughters!

We hope that now Galina and her birth mother will communicate and even one day meet each other!