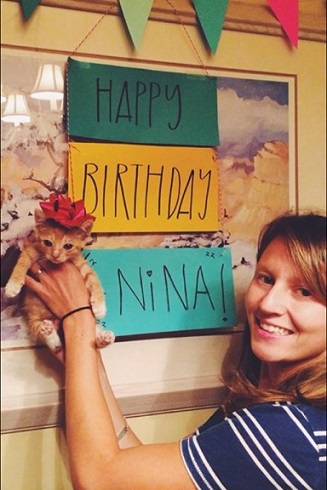 We were addressed by the American family requesting to find the biological relatives of their adopted child. They adopted Nina some years ago and never concealed that he is adopted. They love Nina very much, but she is growing and a lot of questions begin to arise. “Who are my biological parents? Why did they leave me?” And a lot of other questions, for example: health aspect in biological family…

That’s why adoptive parents turned to us for help – they want to find Nina’s biological mother.

We had documents about adopting and we began to search. According to documents the mother of child is Svetlana (don’t call surname). She lived in village of Shakhtinsk near Karaganda. But when we arrived, it appeared that none of this big family lived there. And was it like this. The head of the family was a native of repatriated ethnic Germans. One day he decided to move to Germany for permanent residence. He gathered practically everybody and they moved. Only Svetlana and her elder brother German stayed in Kazakhstan. But soon they moved to another village.

The neighbors didn’t know exactly where did she live, but they knew that German worked at large agricultural enterprise located at 70 kilometers from Shakhtinsk. We went there. We found German without efforts. He practically ran the enterprise and everybody knew him. He told us where his sister is.

After a few more hours of riding along Kazakhstan we finally talked with Nina’s biological mother. We should say that she was happy with our unexpected news. And also she was happy to know that her child is okay and everybody loves her. She didn’t know that she had been adopted. Svetlana answered all our questions and including sensitive question: Why did she leave her child? The story was very trivial. Her husband began to drink and left family. They had two children, no job. She didn’t know what to do because nobody could help her. “I had no choice” – said Svetlana.

We hope that adoptive family will continue communicate with biological mother and one day Nina will see her mother. But we made everything possible.

If you need help to find biological parents and relatives or anybody else please contact us and we will help you.