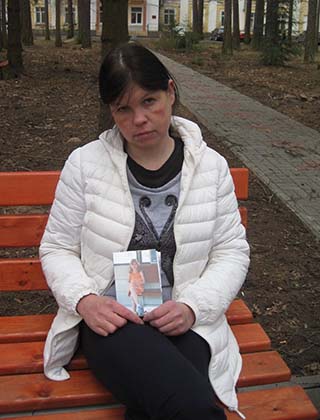 Family from America (Linda and Kenneth) applied to us. They have adopted a girl named Natalia (Hannah) in Leningrad region, Russia. In official documents about adoption it was said that Hannah’s biological mother was called Nadezhda and at the moment of adoption she lived not far from Saint Petersburg in the village of Kavelakhta.

In the course of search we have found out that Nadezhda was the only child in the family. Her parents died when she was 19 years old and she was left alone. She didn’t have any relatives. We have made an investigation in order to find Nadezhda. At first we have found the nearest to Nadezhda’s place of residence post. This post was situated in the settlement of Villozi. When we started to ask workers of the post, they told us that they knew Nadezhda, and one of the workers – girl named Elia even agreed to help us. Postman Elia started to inquire Nadezhda’s closest milieu in order to find her. Eventually Elia found out that at that moment Nadezhda was undergoing treatment in the settlement of Druzhnoselie of Gatchina district of Leningrad region. In that settlement there was a tuberculosis dispensary where Nadezhda was undergoing treatment. She came to the post and the postman told her that we were looking for her.  Then Nadezhda left the postman her phone number. Elia gave that phone number to us and that day we contacted with Nadezhda by phone. We agreed to meet in the yard of the dispensary in Druzhnoselie where the woman was undergoing treatment. In several days our colleague came to that meeting. The weather was good and they sat not far from the hospital in order to talk.

Nadezhda told us unhappy story of her life. Her parents died young and she didn’t have any relatives. She was a late and the only child in very educated but quite poor family. But when she was left alone she couldn’t control her life and she went downhill. She was surrounded by bad people who led aimless life and misused alcohol.

Nadezhda told us that because of her mode of life she got serious health problems and she didn’t know how long she would live. She was in the tuberculosis dispensary because she had pneumonia and because of the main illness it was difficult to cure it.

During our meeting she also told where we could find biological father of Natalia. His name was Dmitriy and he lived not far from the place of residence of Nadezhda. That is why we managed to find biological father of Natalia. Dmitriy appeared to be an exact antithesis of Nadezhda. He was quite successful man, his salary was big enough and he even had his own small rock band. When we told him why we had found him he seemed to be happy and wanted to visit his daughter and her foster family in America. According to his words Nadezhda didn’t tell him about birth of the child. And above all at that time Dmitriy was only 17 years old and at such age people are not ready to become parents.

We delivered all results of our search to Hannah’s foster family. They were pleased to found out that our search ended successfully and the girl had biological parents who were ready to maintain relations by correspondence and even to meet if such moment comes!

We are ready to help you to find biological parents of your child if you have adopted him/her in Russia, Ukraine, Kazakhstan or any other country of former Soviet Union.