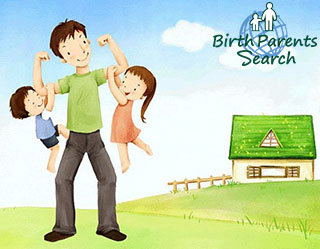 If you don’t know how to find birth father, we’ll try to solve that problem for you. Due to our experience we have got during many years we are sure to say that before searching for the birth father it`s necessary to find the birth mother. Only she knows who was the child`s father, whom she became pregnant from. She knows the exact details of him, family name, DOB, his place of living.

In most cases, the girl, who gave a birth to a child and refused to take her child wasn’t` married to the man officially whom she became pregnant from, that`s why, as rule, the child is given a surname after her/his mother and in some cases the child is only indicated with his fathers name in the birth certificate. That`s why full name, surname and fathers name, his date exact year of his birth are unknown. If we have no these facts, it`s impossible to find the biological father.

The recollections connected with the pregnancy and refused from her child heart most of the birth mothers very much. These recollections are connected with the father of the child, so some women don`t want to discuss that fact. Some of them think the childrens` biological fathers to be bad persons. That`s why they avoid talking about them. Sometimes we do everything in our power in order to make the woman interested in a conversation. And persuade her to tell us some facts about the birth father and some of the women agree to speak to us.

So, taking into consideration the facts we have told you we recommend our clients to try to search for the biological mother first, meet her, speak about the problem. Having got her information, you can act further. If she agrees to apply you with the facts about the biological father, you will have a remarkable chance to continue the searches and find the biological father as well. Both mother and father brought the child into this world so they both are important fro the adopted child. And if the birth mother refuses to give any information and tell you anything about a birth father of a child, then we`ll be helpless in such situation. Without having any information about the father we aren`t able to find him and get any facts about him, his family and his relatives.

Where do we search for birth fathers?

If you do not see the name of the country in this list which your child has been adopted from, we are still ready to help you find him/her biological father and mother. Contact with us and tell us what country your child was adopted from, maybe we will be able to help you to find her/his birth father.

In most cases the biological fathers` attitude to the news is adequate. They are thankful for the news about their child and that their child was adopted. For most of them this information is very important.

We`ll be glad to cooperate with you if you decide to find the biological father. We are always ready to help you to carry out your searches successfully.