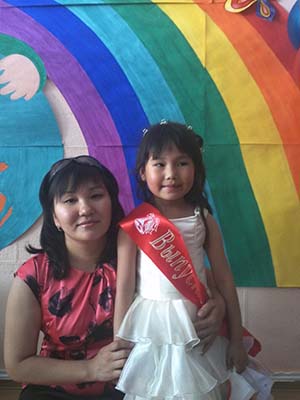 Recently we’ve carried out the search for biological mother for the family from Ireland who adopted a girl from Astana, Kazakhstan in 2008. Astana is the capital of Kazakhstan and our searches took place in that city.

In accordance with the documents of relinquishment that biological mother (her name is Saltanat) lived in the village, 20 km away from Astana, therefore we moved off to this village. When we arrived there, it turned out that Saltanat had left that village 4 years befor. She moved to Astana looking for a job. We found her relatives in the village, they told that Saltanat was in a difficult situation, her husband passed away, Salatanat’s parents also died and she became absolutely alone. Relatives gave us her contact details and wished good luck in our searches.

We’ve phoned to Saltanat about news for her, that her daughter was adopted in Ireland and adoptive parents of her daughter sent the letter and photos. At the begining Saltanat was scared and did not want to make contact, to discuss a subject and to meet our representative. But some days later after emotions have cooled down Saltanat called us. That time the conversation was not so emotional and stressful, everything was calmly discussed. Our representative persuaded her to meet with us.

Saltanat lived in Astana in the microdistrict Koktal, it’s the suburb of Astana. We agreed to meet in the evening at the end of the working day. Our meeting took place in the downtown near the musical academy, Victory Avenue.

The weather was good, so we sat down on a bench and began to communicate.

Saltanat adequately behaved during the meeting, was pleased to receive the news about her biological daughter and a letter with photos and she told us the story of her life.

Salatanat was born and grown up in Kazakhstan. She is Kazakh. At the age of 20 she married, gave birth to two children and they were OK until her husband died.

Saltanat’s parents had died too by that moment so she could wait for no help from anybody, so hard times began in her life.

In 2007 she got acquainted with the man from whom she became pregnant, after having learnt about it he left her.

And Saltanat faced two choices: take care of the child or to refuse it, she chose the second option. She always remembered and thought about the child, she was very sorry for her, but she had nothing to offer the child. No day passed without a pity for her when she thought about her daughter.

At that time she had no home, no work, and there were two elder children to bring them up, feed, educate, etc.

We do not condemn any of the girls who appeared to be in such a difficult situation that made them do such a choice. It is a pity that these things happen in our life. Anyway, Salatanat remained very grateful for our searches, she was happy that we had found her and reported about the fate of her daughter.

She was grateful for adoptive parents who had adopted her daughter and has been taking care of her. Now her child has a loving family and the future. That is very important!

If you want to find biological parents (birth mother or birth father), relatives, please, contact our agency, we will help you to find these people.