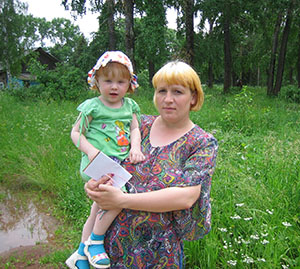 We were addressed by the American family requesting to find birth mother in Ukraine of their adoptive daughter Sophie. From the acquired documents we found out that biological mother of Sophie (this name was given to the girl by her adoptive family) Masha was living in Mironovka village, Kiev region, Ukraine. Surprisingly, Mironovka village turned out to be quite big and we had to make efforts to find the necessary street. However, when we finally found the address, where Masha was registered at the time of Sophie’s birth, it appeared that neither Masha, nor her parents lived there anymore. An old man, who opened a door, told us that Masha got married and moved to Burty village located near Kagarlyk town.

The man didn’t know the exact address where Masha lived. However, he managed to remember that Masha had a sister Olia who lived in Sloboda village and worked there in retirement home. Their mother Alevtina moved to Olia. We immediately decided to go to Sloboda village and find Olia at any cost and eventually find Masha through her.

But when we came to that village and found out from the locals (this is a positive side of a small village – everybody knows everything about each other) where Olia lived, we got disappointed again. It turned out that Olia left for the jubilee of her aunt. Tatiana, the aunt of Olia and Masha, lives in Kiev. However, we managed to find out and get confirmation that Masha lives in Burty village. Then we decided to go to Burty. Unfortunately, we didn’t find Masha in the aforementioned village as according to her husband, she went to Kiev for her aunt’s jubilee. Thank God, husband knew that address and was able to give it to us, whereas Masha had no mobile phone as she lost it and has not bought a new on yet.

We had no choice but to go to Kiev. When we came to Kiev and found the address where Olia lived, it turned out that the majority of relatives who were in for jubilee stayed there for a night. However, Masha was not among them. We had a long and detailed conversation with Sophie’s relatives. As we found out, Masha grew up in the boarding school, while her mother Alevtina was imprisoned. Aunt Tania believes that Masha is a bad lot because she was born in prison and probably that somehow influenced her future.  After Alevtina was released, she gave Masha away to orphanage for three years. Therefore, a child didn’t get the required warmth, love and care that she needed so much. While Masha was living in orphanage, Alevtina surely visited her, but that was by no means the same. Alevtina, being a bad lot herself, raised the like child.

Both aunts Tania and Olia were extremely happy to receive news about Sophie. And despite all the obstacles, we have managed to contact Masha herself. She answered all the questions the adoptive family was interested in. Masha said she would definitely write to the American family as she was really eager to know how her daughter was growing up and progressing. Hopefully, they will never lose each other again.